We enjoyed our first summer in London celebrating the Queen’s Jubilee and hosting the Summer Olympic Games. We were invited to a neighborhood block party in honor of the Queen, by our friend Francine. A variety of streets were closed and decorated with red, white, and blue and faces of the Queen splashed on posters of houses, on flags, and even a cake! It was a wonderful day, with 8 grills barbecuing a variety of meats, and a table a block long filled with salads, snacks, beverages, and a wide selection of puddings or desserts. There was a bouncy house for the children, a live band for the grown ups and a fire truck with the crew stopped by and let the children have a tour. It was fun to be apart of the celebration. 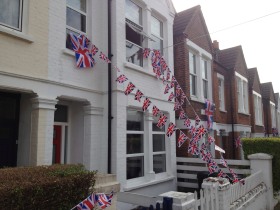 We did make a family outing on the day of the Queen’s Flotilla, despite the cold rainy day. Great excitement filled the air as we waited to get onto a train to go into the city and at the Vauxhall Platform, loads of people waited anxiously to get out of the station to find a spot to see the Queen float by. We had been in London for 6 months at that point, but this was the largest group of people that we had ever witness gather together. Millions of people from all around the world showed up to witness Her Majesty on the Royal Barge and 1,000 other vessels dressed for the occasion. It soon became clear to us that finding “a good spot” was going to be a challenge. In every direction there were hoards of people walking to the river to get a spot. Some people had camped out the night before securing a riverside seat. People cheered and Union Jacks soared in the air hours before the anticipated arrival of the Queen. Lua had a wonderful interpretation of the event, just as a 3 year old would. Behind us was a large building with businesses and flats where people were hanging out of windows cheering and waving. Lua turns to them with Union Jack flags in each hand and says “Hello Everyone!” She was reliving a past life moment, remembering the duties of The Crown. 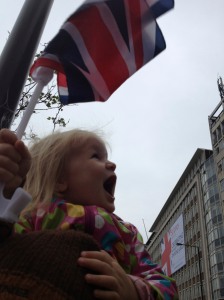 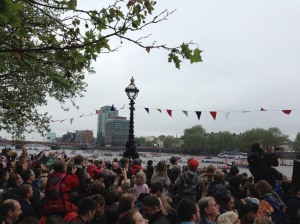 The spot we chose was the last row where the road was slightly elevated allowing Lua, who was on Gabe’s shoulders, the only glimpse of the Queen. After the Royal Barge passed, we dashed up the road to see if we could get a peak too. Gabe squeezed in the crowd and on his tip-toes managed to get a sighting of the Royal Family. I jumped and I leaned, but my 5’3″ body was only able to get me glimpse of the barge just as it passed under the Lambeth Bridge. It was an exciting day indeed! 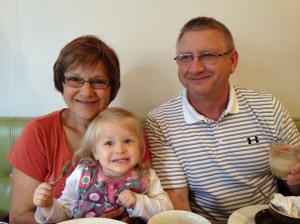 Later that month my parents visited us for three weeks. It was wonderful having them with us, Lua loved getting to play with Grandma Bobbie and Grandpa. We showed them many sights of London, a couple of our favorite days were a tour of Buckingham Palace, watched the Changing of the Guards ceremony, Broadway Market, Tower of London, and the Natural History and Museum of London museums. Grandma and Grandpa joined in on all of Lua’s activities including Playball and Ballet class, as well as many trips to the parks. 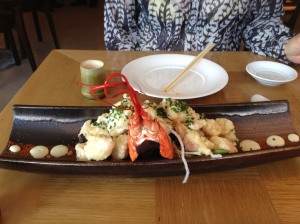 Gabe and I also got to have a couple of date nights. Since they are so few and far between, we decided to treat ourselves to Nobu. It was amazing, did not disappoint and I still crave the black cod with miso! We gobbled it up too quickly before we got a picture of it. But here is a photo of our second favorite dish, by far the best tempura that I have ever had – Lobster Tempura! Yum! 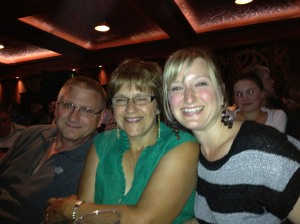 And the final hurrah was a trip to the theater. My parents had never been to a musical or any sort of professional theater, so as my thank you to them for all of their support for our family, we got them tickets to see Mama Mia! It was an incredible performance and a very memorable night for the three of us.